Read feedbacks Be the first who leave a feedback!

The goods sold by us undergo multilevel quality and accuracy checks. All the watches are further tested using a watch timegrapher. You can be sure that the watch you bought in our store will run as accurately as possible.

We are dealers of the factory and sell only authentic Vostok watches. All watches in the store are considered part of the trustworthy tradition of Soviet and Russian watchmakers.

If you are not satisfied with a product that you have purchased, you may return it within 30 days of delivery for a full refund or replacement

We sell Vostok watches all over the world and use reliable packaging of goods to protect them from appearing any defects in shipping process. 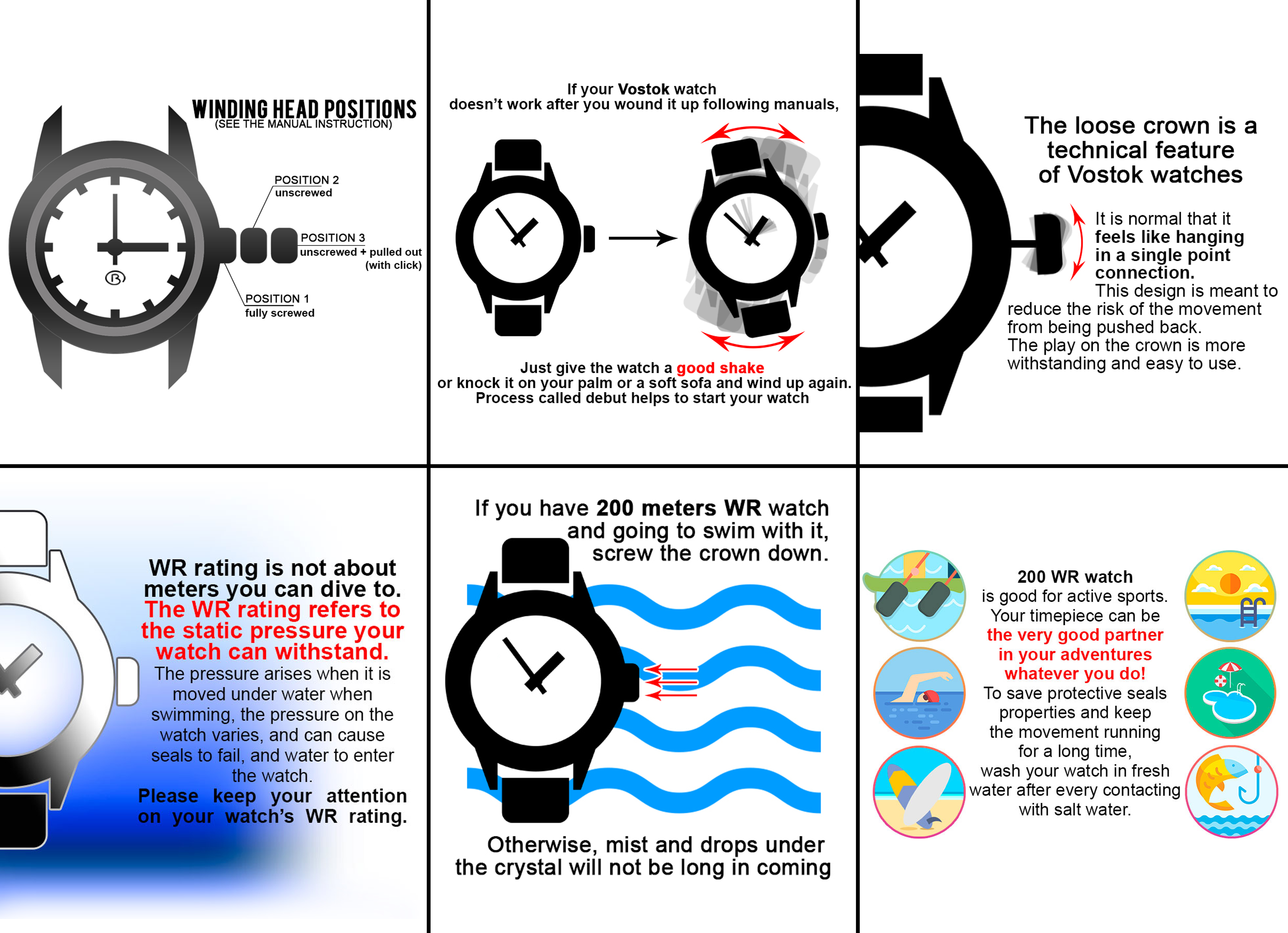 IMPORTANT INFORMATION ABOUT THE SHIPPING


The goods will be delivered via Registered Air Mail with tracking number after the payment has been paid in full and cleared. Please allow within 4 days for shipment arrangement after completion of payment.

For certain countries the delivery time may take longer then above stating time. Please contact us for more information.

Feedbacks
This is my second Vostok, and I have to say I like this one better than my amphibian (Which I do enjoy wearing).<br /><br />- The 24 hour clock is unique. Yes, it does take a bit to get used to it especially with the minutes and some of the index markets because of the additional hour markers but after a few days its second nature.<br />- Out of the box I was getting around +30 sec
a day (a little high for me). I regulated the watch myself and now am +_ 3 - 5 sec, more than accurate enough for a mechanical watch.<br />- The watch has the same fun quirks as other Vostoks (Bi-directional bezel, wobbly stem, no fast date option, case back retainer ring, and sharp edges) but in my opinion these just add to the uniqueness of these pieces) This definitely looks and feels like a tool watch and that has its own charm.<br /><br />If you are looking for an inexpensive automatic with a great story behind it you should definitely give this one a try.
I initially gave this watch a 2-star review because of several problems, and because I didn't believe the 200-meter water resistance claim. Let me explain. 24-hour military watches date back at least to the early 1900s, when submarine crews needed to tell time without seeing whether it was night or day. They can also be used to track time following a "zero hour" for up to 30 days by starting
at midnight (zero-hour or H-Hour) on day 1. It's a useful idea, although it takes getting used to as one must learn to read a 24 hour dial, where 12:00 noon would be 6:00 on a traditional 12 hour watch face, and where extra hour marks can lead to mistakes (every odd-numbered hour is at 2 1/2 minutes, half way between every even numbered hour, and the extra pip can be confusing).<br /><br />However, this particular watch by Vostok suffers from some problems. The biggest problems are that the bezel rotates freely rather than clicking from position to position, so it can easily be moved by mistake, making it unreliable. And the date in the date window is not aligned making it difficult to read for dates greater than the 9th day of the month. The acrylic crystal scratches easily. My watch ran slow out of the box, losing about 20 seconds/day brand new, whereas most mechanical watches run fast when new and slowly lose time as they require maintenance. And, setting the time is a pain because there's a lot of loose play with the stem, on top of the fact that the movement is non-hacking (i.e., the second hand does not stop when you pull out the crown). Setting the date requires moving the hands past midnight -- there's no way to quickly set the date directly like on most contemporary watches.<br /><br />At this point I was fairly unhappy with this watch. But then I did some research into its history. In 1967, the Soviet government requested that Vostok design a diver's watch that was comparable to Western makes like Rolex, Omega and Seiko, in that it could operate at depths up to 200 meters. They could not make use of existing patents because of Soviet policy not to pay Western patent licensing fees; so they had to start from scratch. Two designers at Vostok, Mikhail Novikov (their chief of design) and Vera Belova (a female engineer), analyzed various Western watch designs to see how they worked and to come up with novel solutions to create a watch that could withstand extreme pressure and shock. They made three basic innovations, with the crystal, the caseback, and the crown. Using a curved Lucite plastic crystal, they used the flexibility of the plastic to create a seal in which compression causes the crystal to expand in diameter and actually strengthen the seal, eliminating the need for special rubber seals. They developed a two-piece steal caseback that does not stretch out the O-ring when it's tightened, and that compresses under pressure providing a better seal. Finally, the crown screws on like a cap on a bottle, and is loose when unscrewed, by design, so that shock to the case won't bend or break the stem. The resulting production watch was tested in the North Sea during a simulated submarine rescue in the late '60s, with no problems.<br /><br />At this point, my respect for Vostok watches increased dramatically. For under $100, you get a unique watch with an interesting history and some great design features. Also, there's a big modding community of people who replace parts of the watch to create unique watches, and who post on YouTube (just search for "Vostok watch" and you'll find many how-to videos for all aspects of watch assembly and maintenance). It's got problems, too, as I've mentioned above. But I've increased my review from two to four stars. Cheers!
Video reviews1

There is a wide selection of watches and accessories in the departments of Soviet Market Store. You will find all the classic models of Russian Vostok watches with a detailed description of technical characteristics, photos and prices, as well as the freshest new-ins. You can get the watch anywhere in the world by placing an order on Soviet Market right now.
2016-2020 © Soviet.Market
Buy online Russian Watches
Loading...